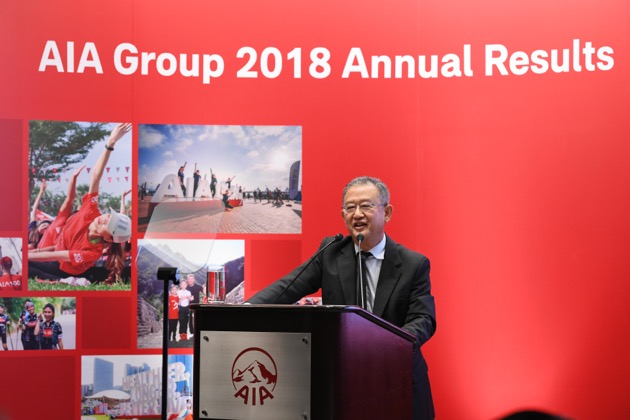 A week before Ng retires as Group CEO of AIA, he accepts my invitation for a Teh Tarik interview. It was a late Friday afternoon. As I take the lift to the executive floor, Ng’s personal assistant greets and ushers me to his inner sanctuary. Ng looks relaxed and sharp in his suit sans tie.  In keeping with social distancing norms, we greet each other with Namaste gestures. A gracious host, he shows me around his sleek office. I take in the spectacular views of Hong Kong’s fragrant harbour, to the left is the iconic Ferris wheel rotating around a gigantic AIA logo that overlooks boats criss-crossing in a busy harbour. Ng invites me to take a seat, and we make ourselves comfortable on his white leather sofa. We break the ice as I share with Ng that I have an emotional attachment to AIA. My mother had gifted me an AIA savings plan when I turned sweet 18. And on my tenth wedding anniversary, my husband gifted me an AIA universal life insurance policy for my benefit.

We started the interview talking, as everybody does these days, about COVID-19, and its impact on businesses. Ng contended that some businesses would be affected, and others will have to adapt to a post-COVID world. But Ng was quite positive about the insurance sector and its recovery, “we are fortunate to be in the life insurance business. In life insurance, we expect a V-shaped recovery because the demand for life insurance is not going away. If anything we expect there to be a greater awareness. People are more aware of their health and well being.” An optimist, Ng predicts, “life is not going to completely change. Some things will change. I am quite sure the use of digital will increase. Once this pandemic is over, and once a vaccine is found, life is going to go back to where it was. People who think they will never come together again are a bit silly to me.”

Hailing from Raub, a town in west Pahang, Ng grew up in a family of eight children, Ng describes himself as being the fifth child and “lost in the pack.” One of his favourite childhood memories in the 1960’s was out playing sports in the field with friends. Ng spent four years at the Royal Military College (RMC) pursuing his A-levels. Nicknamed the ‘Sandhurst of Malaysia’, RMC has nurtured many Malaysian greats, including Datuk Ramli bin Ibrahim, Jomo Kwame Sundaram and more recently, Syed Saddiq. Typical of an all-boys’ school, he had his fair share of being bullied, but he had a positive twist crediting RMC for making him tougher. Quite the sportsman, Ng competed in all kinds of games, including basketball, volleyball and hockey. Ng credits his professional career to his mathematics teacher Mr. Chakaravarthy. He inspired Ng to study actuarial science, promising him that, “the sky will be the limit.” Ng took Mr. Chakaravarthy’s words to heart. After graduating from Lafayette College with a Bachelor of Science degree in Mechanical Engineering, Ng worked for a year in Worcester, Massachusetts as an actuarial executive, before returning home to work with AIA in Kuala Lumpur. Ng has been a Fellow of the Society of Actuaries since 1985.

Ng is considered as the first Malaysian to helm a major global financial services company. As a role model to many, Ng’s own hero was his mother. “My mum played a very important part when I was growing up and in doing well. That is why the role of mothers is so critical.” Ng’s mother was born with a silver spoon and her family owned properties along Imbi Road. “My mom came from a rich family but my dad came from a poor family. After marrying, my mother became adaptable." Without the resources of a domestic helper, Ng recounts that his mother would “carry one child on the front and one on the back while doing housework.” Having placed great value on education, his mother would use positive encouragement to raise the bar for him. She would often say to her neighbours “Keng Hooi got number one again. And with that, how can I disappoint her?” Hailing from a family of brainy genes, all his seven siblings are professionals. His oldest brother is a quantity surveyor, his youngest brother a cardiologist, his three other brothers are engineers, one sister is an accountant and the other is a teacher. The family genes have passed onto his children. His first son studied engineering at Brown University and his second son at Imperial College doing a PhD in quantum physics, befitting of a career in rocket science.

When asked what were his three pivotal defining life moments, Ng reveals them as firstly, his RMC school days. Secondly, his early working years at both AIA and Prudential. And thirdly, climbing to the top as Group CEO of AIA. We travel back in time as Ng recounts his career journey. He began his career in insurance in 1980 at AIA. Back in those days, he lived in a small studio above an Indian restaurant in Wyndham Street during a six-month internship in 1981. Contrast that, and fast-forward to his second stint in 2017, Ng now sits on top of the Central Business District of Hong Kong. Ng admitted he never thought he would return to Hong Kong as the Group CEO. Ng says, “AIA was a different company back then. When I started my career, AIA was part of the American company AIG.”  Today as a stand-alone company, AIA is the largest Hong Kong listed company that is headquartered in Hong Kong with a market cap of $100 billion. Unimaginable even a decade ago AIA’s market cap is now multiple times bigger than AIG. Ng is proud of what AIA has achieved. AIA now has more than 50 million policyholders, of which 30 million are individual policyholders and the remaining through corporate insurance.

Ng credits much of the transformation of AIA to his predecessor Mark Tucker and Chairman Edmund Tse. Ng and Tucker had worked together for 20 years at Prudential, a British life insurance company where they were responsible for the Asian business. Ng suceeded Tucker at AIA when he moved on to become the Group Chairman of HSBC plc in 2017. When Ng began in 1989, Prudential had a meagre 3% market share in Malaysia and 3 million ringgit of profits. Prudential Asia only made up 1% of the Group’s worldwide business. Ng became CEO of Malaysia in 1998 and in 2005, the Regional Managing Director responsible for a group of countries in Asia. Fast-foward to 2008 when Ng left Prudential, it had achieved 20% market share in Malaysia with 300 million ringgit of profits. By then, Prudential Asia had grown to 50% of the Group’s worldwide business. Ng was very proud of the fact that he managed to shift the demographics of the company to give Asians more opportunities. He says, “the Malaysian office grew from a few hundred to over 10,000 employees and agents.” Although the Prudential Asia headquarters were in Hong Kong, he chose to remain in Kuala Lumpur citing his affinity for Malaysia and staying close to his family and loved ones.

In 2008, Ng moved to Singapore to take up the appointment as CEO of Great Eastern Holdings, a Singapore listed insurance giant. This was during the time of the Global Financial Crisis. As he stepped into his role, his first crisis management was to bail out approximately 20,000 customers in Singapore, making whole the SGD650 million of collateralized debt obligations (CDOs). The financial crisis had left the value of CDOs with a big haircut. I could relate to Ng’s high-stress as I was working in investment banking during the crisis. It was a time of great uncertainty as banks were collapsing. And structured products that were touted as safe investments turned into ‘financial weapons of mass destruction’ overnight. Ng felt a deep sense of responsibility for these investors. A CEO with a big heart, Ng says, “these were people’s lifetime savings so you can imagine what such losses would do to these customers.” He was on a mission to oversee a compensation settlement. To cut a long story short, Ng says, “in the end we just gave them back the original amount – the principal less the interest that the investors had already received.”

A Malaysian interview would not be complete without talking about makan. He enjoys a plate of spicy nasi lemak followed by some Kopi-O and rambutan.  His favourite Malaysian singer is the late legendary Sudirman. He admits he is not much of a movie buff but prefers audio books. His last good read was “Born A Crime,” an autobiography written by the South African comedian Trevor Noah. The conversation turned to how Ng spends his weekends. Known as a ‘struggling 14’, he admits to being an avid golfer who spends his Saturdays on a golf course. In good humour, I teased Ng and asked if he were only allowed 3 clubs, which would he bring? After a brief moment of analytical pondering, his response was strategic. He says, “a putter of course. And a 3-wood to help hit off the tee and from the turf.  And a mid-iron that is long enough to hit any distance both far as well as close”. I would later learn of an epic golf game that Ng played at the Clearwater Bay Golf Club with our Chairman KC Gan, Deputy Chairman Song Hoi See, and Founding Member Michael Yong-Haron. It was cart versus cart. All competitive players, the game ended in a draw at the very last hole as Song squared the game with an incredible long put.

What strikes me most about Ng is that he is calm, balanced and strategic. Having clocked in 41 years in the insurance industry, I asked Ng about his retirement plans. Ng says he will stay on as a senior advisor at AIA for another year. And for his next steps, he says, “I will wait and see. I wish to spend time on things that are interesting. And the people side will be something I will continue to do.” A recurring theme in our conversation was that Ng is all about growing people. Ng says, “CEOs can touch people’s lives and inspire them to do better. That is what I have always been passionate about: growing and developing people.” I asked where he would retire, and Ng says, “all my life, my wife followed me in my different postings.” And with a little laughter, he says, “now is my turn to follow my wife Seet.”

As Ng is most engaging, our time together passes by quickly. By this time, the sun had already set, and Hong Kong’s amazing lights were brightening up the city’s streets. Like the city of Hong Kong that never sleeps, my hunch is that Ng will find new beginnings in his so-called retirement. I thank Ng for being so gracious with his time and memories. And to all our lovely readers, please stay tuned for my next column.