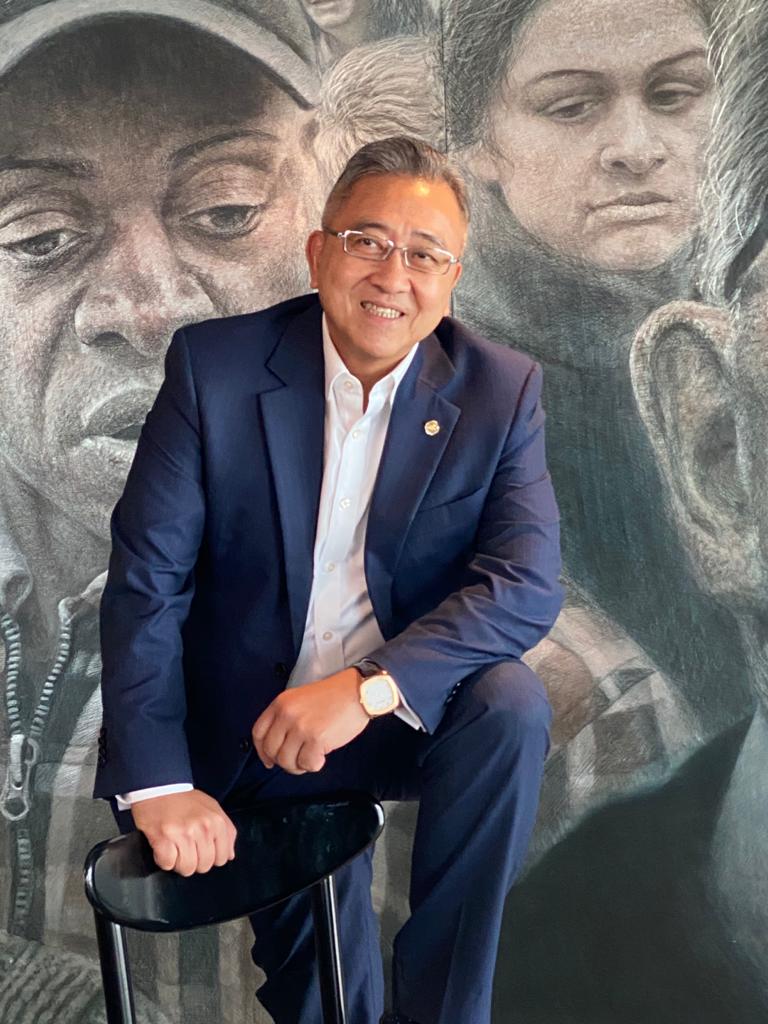 It was a glorious day with the morning sun shining through. I arrived early at the American Club in Central. Seated at a booth, I am surrounded by large TV screens playing all types of sports. As my mind drifts away momentarily, I look up and see Song dashing in. Immaculately dressed in a suit, he is all smiles as he makes his entrance.  Recognising me, he waves his hands in the air before offering greeting kisses on the cheeks. Pleasantries were exchanged. It was 10am and he just came from his office by the airport where his flagship Plaza Premium Lounge is located. After reviewing the menu, orders were made for breakfast. He was very polite pausing to thank the waiter who writes up his healthy option of avocado toast and latte. As he adjusted his posture comfortably in the booth, he remarked that the American Club brought back memories of his investment banking career, something we share in common albeit several decades apart.

Song is the ‘man of the hour’. If you google his name, there are copious pages of his accolades, recognitions and interviews. In the past 5 years his Plaza Premium Group has received more than 60 awards including ‘World's Best Independent Airport Lounge’ for the past four consecutive years at the Skytrax World Airline Awards. In addition, his company won the ‘Best Airport Lounge Operator’ by TTG Asia magazine for the past two consecutive years. Some of his personal awards include ‘Ernst Young Enterprenuer of the Year’ and ‘Master Entrepreneur of The Year 2018 Malaysia’.

Hailing from Sungai Udang, a small village in Central Malacca, 13 or 14 miles from the nearest secondary school, he grew up in a kampung speaking Malay like a native. His favourite Malaysian architecture is still the kampung stilted house. Reflecting on his childhood, he remembers vividly his adventures of catching fish in the ‘sawah’ and riding on a ‘kerbau’. One of his favourite past times was kicking football into ‘senget’ goal posts. Chuckling away, he joked that “one goalpost was on the left and the other on the right!” When asked to describe his family, he banters, “I come from a big family of 13. You buy a dozen and I was a gift. I am the second youngest in the family.”

Ever so humble, Song credits his uncanny success to his parents’ genes. He attributes his business acumen to his Mauritian-born father who was a shopkeeper at a ‘kedai runcit’. And he attributes his resilience to his Malaysian born-mother who successfully raised thirteen children.  His paternal grandfather was a doctor and it was always in the family tradition to be frugal. He recalled that every Chinese New Year, he would receive one new set of pajamas and a pair of new Bata shoes that would last him for the rest of the year. Born a natural leader, he was always affectionately known as “Dai Gor” (big brother) ever since his primary school to university where he was a student leader.

For a man who spends most of his time on airplanes and at airports, I was curious to find out when he took his first airplane ride. Song travelled back in time to when he was 17 years old, and on his way to the United Kingdom to study for his A-levels in Cambridgeshire. He spent his matriculation and university in England. After graduating from North East London Polytechnic (now known as the University of East London), serendipity brought him to Hong Kong in the 1980s for his first foray into corporate work. Starting at the bottom, he worked his way to a senior investment banker at Lehman Brothers.

Ironically, Song attributes his achievements to his humble beginnings. With very little in his pockets, he would take the time to carefully observe market inefficiencies. One of his early observations was that airport lounges only catered to business and first class travellers, neglecting the masses who also required the basic services of a lounge as people need waiting space to transit or wait for delayed flights. He saw this as a necessity and not as a luxury. Seizing on this gap in the market, he launched his first airport lounge at the Hong Kong International Airport in Chep Lap Kok in 1998, and the rest is history. At the time of our interview, the Plaza Premium Group - of which he owns 100% - operates in more than 170 locations in 46 airports globally across 23 countries serving over 16 million passengers annually. His portfolio also includes 12 airport terminal hotels. Reflecting on how it all began, Song pointed out that, “ever since the history of commercial flights, no one ever thought about independent lounges for the masses until 1998. Lounges were always created for CIP – ‘Commercially Important People’. I was the first one in the world to create independent lounges for the people. And this was because of my own personal bad experience as a traveller.” While a capitalist at heart, he is the first to admit that the marketplace is inefficient, and he is always looking for a gap to fill and make life easier for everyone.

When Chap Lap Kok was opening, the airport authority approached him to open a business centre because he was already established in the field. But Song had the foresight to challenge the airport authority and insisted that the airport did not need business centres, but rather travellers needed airport lounges. And he persevered in pushing his proposal. He recounted those uncertain times when “the airport authority was not sure it would be successful.” With the odds stacked against him, his first lounge was allocated a poor location in a far corner of the west hall. Given its location, hardly anyone noticed his lounge and within six months, he exhausted all his savings and he was at the brink of bankrupcy in 1998. What saved him was his sharp creative mind. With a poor location and non-existent marketing budget, he had to think outside the box. His eureka moment came when he thought of using banks and credit card companies to promote his business. He approached banks telling them the customers would not take all their credit cards when they travel. So how can one credit card have an edge over another credit card? His insight was credit cards make money from foreign exchange and not from the meagre merchant fees. So he offered them a solution. If these credit cards gave travellers access to his airport lounge, then customers will likely bring these credit cards when they travel as they would enjoy the hospitality of his airport lounge. This was indeed a win-win for everyone - the customers, the credit card companies and of course the survival of his airport lounges. It was this simple idea that turned his business around, and today Plaza Premium Lounge is a worldwide brand across airports all over the world. Just in Hong Kong alone, he operates a total of three Plaza Premium Lounges, one Plaza Premium First and a ‘Root98’ (a play on ‘Route’ and the year the company was founded).

A constant theme that Song brings up in our breakfast is that the secret to his success is simply to have “a curious mind and an observant eye.” Although he is known for his airport lounge, his first foray into business was in the early 1990’s when he could see China opening its doors to the world, and this meant multinational companies would need to set up representative offices in Hong Kong as a gateway into China. So his solution was to open business centres called Plaza Business Centre. With the ups and downs of business cycles, Song’s parting words to aspiring enterprenuers is “when facing any crisis or difficulties, don’t walk away. Don’t complain. Calm down and just observe.”

A Malaysian gathering would not be complete without talking about makan! His favourite Malaysian drink is cendol with gula melaka (home sweet home). He enjoys his assam petai prawn and a Nonya style fish head curry. And while he savours a plate of Penang Char Kway Teow every now and then, he only indulges one plate at a time.  His favourite fruits are none other than durian, the king of fruits, followed by mangosteen as he believes in balancing yin and yang. Sharing something in common with my father, his favourite celebrity is P Ramlee.

What strikes me most about Song is his resilience and survival instincts. He overcame the Asian Financial Crisis, the internet bubble, SARs, the Global Financial crisis, HK’s recent social disturbances, and now we are facing the mother of all crisis - ‘COVID-19’. This pandemic will undoubtedly have long term impact on the travel industry, the airline business and how we travel generally. But with Song’s ‘Malaysia Boleh attitude’ and keen powers of observation coupled with his strong business acumen, I am confident he will come out of this stronger than ever.

As I signed the bill, I thanked Song for being so authentic and generous with his time. And to all our lovely readers, please stay tuned for my next column.